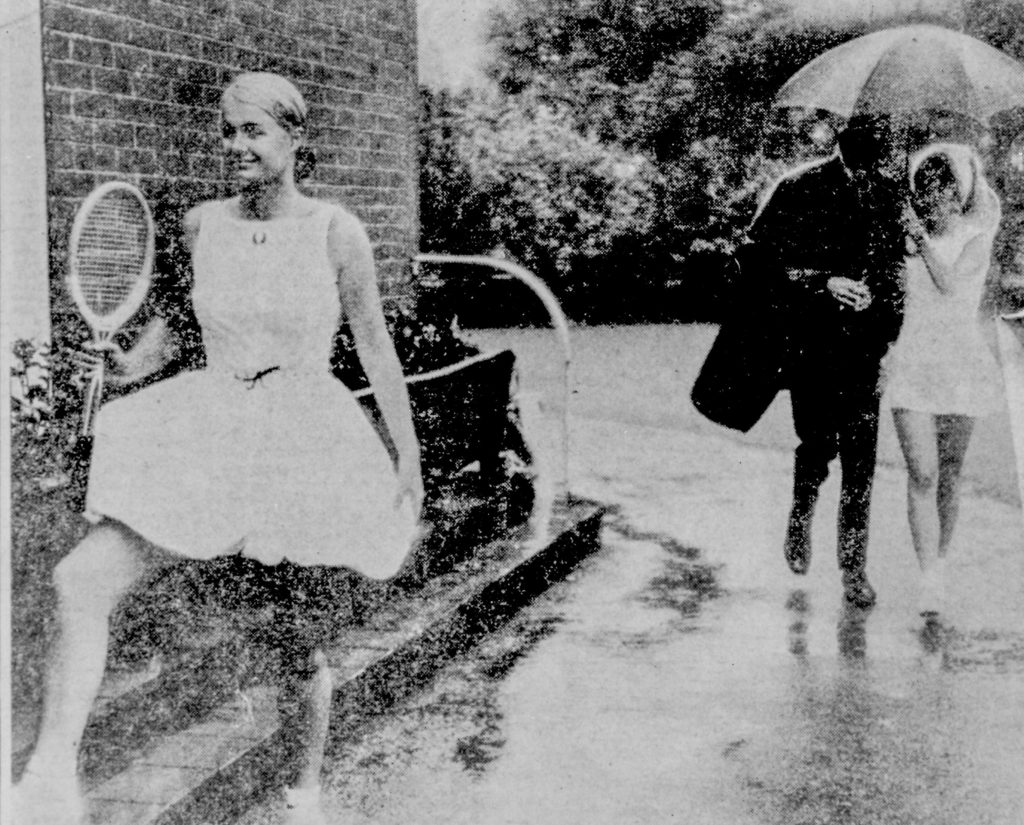 Excerpt from “A Spanish Love Affair”

On the day of my first match at Wimbledon, in 1970 a chauffeur – in full livery complete with cap – arrives in a black, shiny Rolls Royce at the boarding house in Putney where I am staying.  The other,  not-so-fortunate players who haven’t made the draw,  plus our landlady – dressed in a crinoline brunch coat with her hair in rollers, covered by a paisley chiffon scarf – gather at the front door to and wave me good-bye. I hop in the front with the driver because I get carsick in the back, and am so excited that I don’t shut up the whole trip!     As we drive regally along, everyone keeps turning around, to see if they recognize me. “Am I someone famous?”

The sun, for once, is shining as we drive into the Club grounds past mile long queues of people waiting for tickets for the standing room area. Loud, spruiking scalpers are plying the crowd with tickets at exorbitant prices. The crowd parts as we drive through the gates then pass the Centre Court to the Players Change Room. Autograph seekers thrust their books at me as I get out.  I sign a few, and then race for the cover of the Ladies.  No doubt they are disappointed that I am not one of the top players!

I am due to play Margaret Court – the Number One Seed – in the singles in the First Round at 11am, and try to cool my nerves before the match.  I am most certainly relieved that, due to rain, we have been rescheduled to play on Court 17.  It would have been a nightmare to play her on the Centre Court, where we were originally drawn.

As I make my way through the crowds milling around the outside courts, adrenalin is surging through my body, making my knees go weak.  Unfortunately, I’ve managed to get very little practice on grass since I’ve been in England and find the transition from the very slow loam courts which I’ve been playing on, to the faster-than-lightning grass, difficult. The long, lush, English grass is also very different from the Australian lawn courts which bake themselves corn coloured during our long hot summers – by the end of which there is mostly dirt with only a few odd spikes of grass around the service line.

There is a large crowd crammed around the court which I am not used to and I become caught up in the occasion.  Margaret Court turns out to be every bit as formidable an opponent as I imagined she would be.  As well as being the Number 1 Seed in the tournament, she is the current Australian Champion.  It doesn’t help that grass is her favourite surface and really suits her serve/volley game to a tee.  I play in a hesitant manner, mistime the ball and don’t really settle down in the match at all.

It is not a pleasant experience.

I already had the “Nervous Nellies” before the match, having read a feature in the paper this morning, which compared the various arm lengths of the players in this year’s tournament.  I am especially intimidated by the fact that Margaret’s arm length is longer than two thirds of the Men’s Draw.  That doesn’t help my confidence and during the match when she comes into the net, it’s all I can think about.  My worst fears are confirmed.  It is just impossible to get the ball past her.  It feels like she is just all over the place without taking more than a step in any direction. The reality: with that massive arm stretch extended to the maximum… she is!

She also hits the ball with a lot more power and depth than I am used to, which I’ve heard is due to the fact that Frank Sedgman (who is coaching her) has had her doing weight training.  She wins easily but fortunately I manage to get a game in the second set for which I get a big cheer from the crowd.  6-love, 6-love would be very embarrassing even though she is the Number One Seed and we are on an outside court.

I expected to lose so I am not that disappointed. As I walk back to the change rooms by the other outside courts I notice that there are just so many good players. As only one hundred and twenty-eight players make the draw, I feel I’ve done well just to get into the tournament especially when I take into consideration that I am far from dedicated, have a dreadful second serve and am the female version of McEnroe.  I also have smoked all the cigarettes that the Rothmans and Malboro  (tournament sponsors at that time) representatives gave me to hand around to the spectators.   Besides Margaret has the advantage of an entourage, whereas I am here all by myself.

I console myself in the change room with a long hot shower followed by afternoon tea on the lawn in the sun outside the centre court. I eat the biggest, sweetest strawberries I’ve ever tasted, with lashings of cream washed down with a half-way decent cup of tea. I’ve never really liked strawberries all that much before, having always found them a bit sour, but these English ones are so sweet and luscious.  They are truly to die for!