I am soft-hearted when it comes to animals. In fact, I gave up eating meat as a young girl when Mum, who was a country girl, told me that the little lambs gambolling around the fields and the sad-eyed calves peering at me from behind the fence would soon be gracing my dinner plate. I told her they would not, and they never have.

However, I have to admit that I was persuaded to attend a bullfight by my doubles partner, Terese Mackay. It was her dream to see one before she returned to Australia. Perhaps the fact that Terese was also from a farming background allowed her to view bull fighting in a different light.

The bullfight (corrida de toros) we went to featured the professional debut of John Fulton, the only American to ever become a professional bullfighter. When he was 12 John had seen the movie “Blood and Sand” starring Rita Hayworth and Tyrone Power as a doomed bullfighter. It so stirred his sense of gallantry and romance that he decided on the spot to become a bullfighter.

John Fulton fulfilled a long-held dream when he confirmed his alternativa at that fight I saw in the Plaza de Toros de Las Ventas in Madrid – the world’s most important bullring. He performed well enough to earn the respect of the aficionados attending the bullfight on that warm Madrid afternoon. However, not well enough to be awarded the bull’s ear by the judges for which I was very grateful. Rumour had it that he was going to throw it towards the group of Americans I was sitting with. I decided then and there that this was the one and only bullfight I would ever attend.

I confess despite my aversion to bullfighting, it is an amazing spectacle. The high-spirited bull fighting songs called Paso Dobles arouse the emotions of the already excited crowd who have been throwing back cognacs all afternoon.

The picadors mounted on their horses and the slender, pert-bottomed, exquisitely dressed matadors in their elaborately embroidered tight-fitting suits (trajes de luces – suits of lights) with reflective threads of gold, silver and sequins, parade around the ring followed by the drama of the matador’s battle with the bull.

Trumpets blare as the first matador makes his way into the ring. The bull is then ushered out of the enclosure where he is being kept, appearing to be somewhat disoriented on his arrival which isn’t at all surprising with a crowd of nearly 25,000 people yelling for his blood. After being prodded by the picadors near the entrance, with blood pouring down his back, the frenzied bull tries to rush at the horses and gore them under the saddle. The Matador attracts the bull’s attention towards him by waving his cape. The corrida begins. In Madrid, the crowd are aficionados and a chorus of “Oles” greets each successful veronica, and in particular, the more daring moves of the bullfighter.

Bullfights are a no-win situation for the bull. They only have one fight during which they usually are killed by the matator plunging his sword between their shoulders into the heart. A team of mules or horses then drags the dead animal out of the ring. If a bull does kill a bullfighter, it is the job of the next matador to kill the bull.

Bullfighting, although it is considered part of Spain’s cultural heritage, has declined by 60% since 2007 and was banned in Catalonia on 1st January, 2012. I also noticed that many of the bull statues on the hills throughout Spain have been removed although corridas are still avidly attended and enjoyed in most parts of Spain . The tickets were sold out for the corridas in Seville during the feria this year – La Maestranza ring holding a 13,000 capacity. There is also a new star matador 19 year old Peruvian Andres Roca Rey.

The amazing coincidence occurred when I attended the Margaret Olley Exhibition this year at the Ervin Gallery. Over lunch I sat with Chris Meagher’s brother. Chris Meagher is an Australian man who also became a bull fighter in Spain in the 60s, fighting under the name “El Australiano”. He had befriended John Fulton and lived and trained with him in Seville.

Chris Meagher very kindly checked over the chapter in my book about the bullfight. 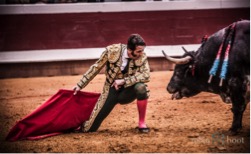