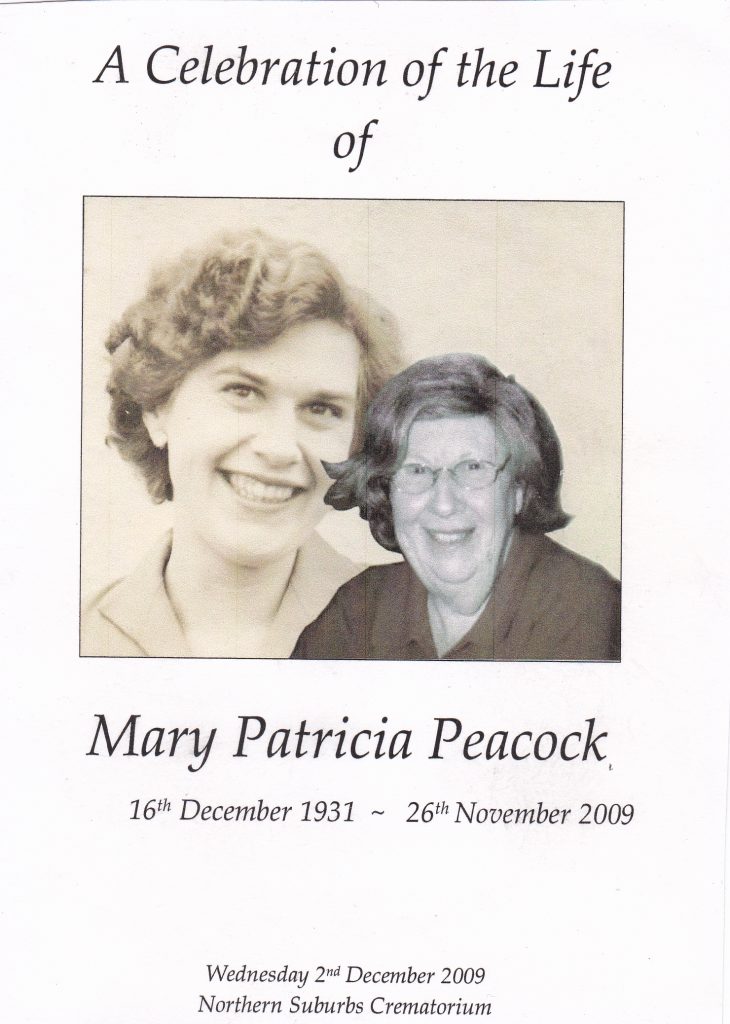 Although her earthly cloak still lies on the bed

Supplied by the Manly Hospital

She is flying high

Bathed in a heavenly light

She sees and hears as she did as a girl

As in the Cambridge choir days

As she belts by on a fast-moving cloud

The wind in her hair

Which has miraculously returned to her

She shouts “Do not mourn for me my friends

I am having a ball” 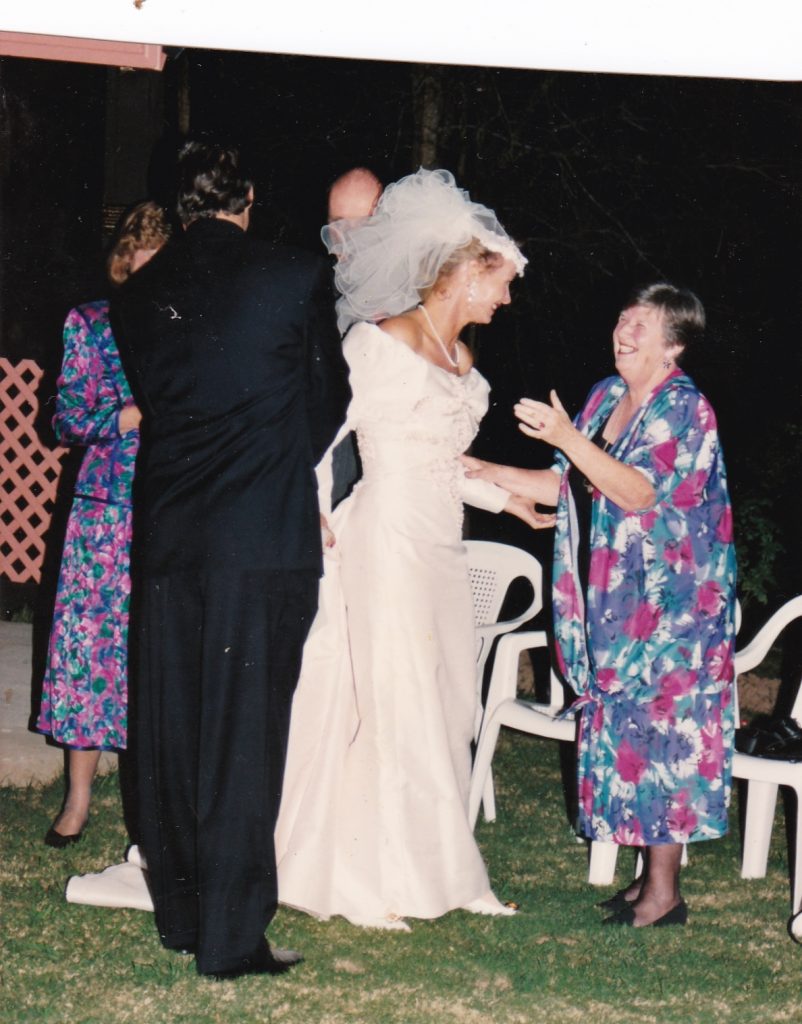 Mary and I were unlikely friends.  She was a Cambridge Graduate in science and maths.  I left school as soon as I could and could never see any point in algebra, geometry and science – Mary’s favourite subjects.. I just knew I’d never use them, and I was right.

Mary was left brain.  I am so far right I’m nearly off the board.

Mary was short and plump.  I am tall and athletic.

I am a clothesaholic and love to buy my clothes at Carla Zampatti. Mary shopped for her clothes at Target but had the ability to make them look very smart and professional.

Both of us didn’t like housework.  Mary less than me. She was an early feminist and had little interest in food and its preparation she told me. Her cleaners told me that they only ever had to dust out her oven and the top of her stove.

I think that housework is a waste of time and I always have a lot of other things that I prefer to do.  But I do Iove to cook.

Mary and I met when she came to teach me how to use a computer.  Poor Mary!  I was no doubt her worst student.  But we just clicked.

We solidified our relationship when we went to Toastmasters together.  We learnt a lot about each other as we made our way through the various speeches and in the trips back and forward to North Sydney.

Mary worked for me for several years in my real estate business.  She was the best property manager I ever had, never losing a case at the Residential Tenancy Tribunal.  In fact, the Members at the Tribunal seemed to almost confer with her.

I can’t remember ever having a disagreement with her about anything. 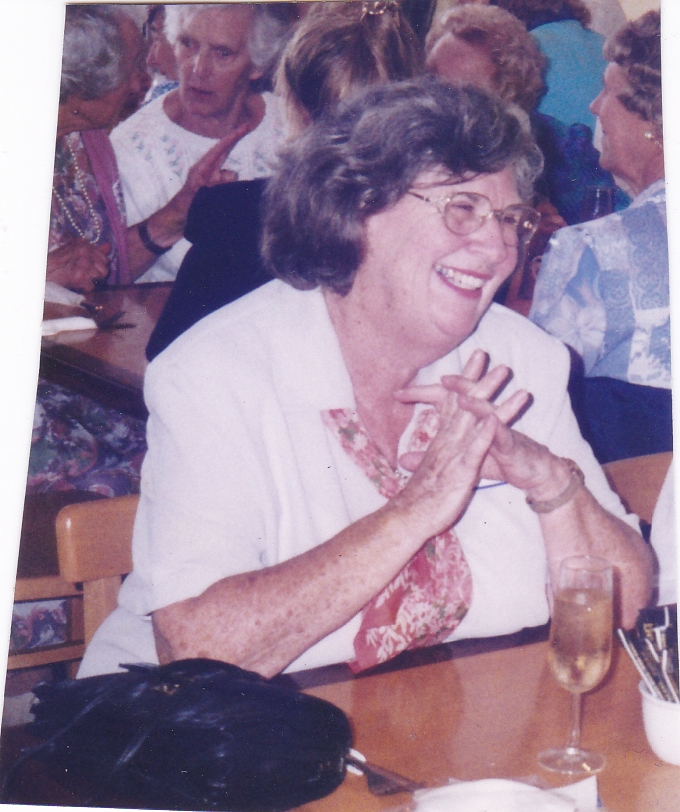 Mum and I celebrated our “0” birthdays at the end of March, 2009. Unfortunately Mary, my long time helper and dear friend couldn’t attend due to a sudden onset of ill health. Mary’s life changed dramatically in May of that year -2009 .  She went to her local medical practice with a backache. At first the Doctor thought it was shingles. However, one day she felt so ill she had to be taken to hospital in an ambulance where she was diagnosed with terminal bowel cancer.

Markus and I had planned to go camping in the Northern Territory in June but two days before our departure Markus tore his meniscus and had to have an arthroscopy.  Our trip was canned.  However this proved fortuitous because I was able to spend time with Mary who after having one lot of palliative chemotherapy , a relatively new treatment, which helps manage pain and extend life, she decided not to continue because of the side effects.

We enjoyed a very special five months as you will read from the notes in my diary.

“I had to wait until Thursday morning to find out how Mary was placed, pain wise.  When I ring her, she says she has it under control.  I notice she has become frailer and is a little slower as we make our way to the car. However, she is radiantly happy about a drive to Dee Why Beach and lunch at Sea la vie.

The parking fairy is in full attendance. We manage to find a spot right in front of the café which is great because Mary can’t walk too far.  With her disability sticker we can extend the hour limit. We both sit blissfully facing the sea. Mary hasn’t been eating very much but sitting and breathing in the salt air and checking out the extensive menu, her eyes sparkle and her appetite perks up.  She decides on a mushroom and chicken crepe.  Today we are talking about love.  I’m preparing a speech about it.  I ask Mary what feelings she had when she was in love.  She is totally stumped.  Perhaps I shouldn’t have asked her.   I know she has had her ups and downs.

Over our I learnt a lot about Mary.  She grew up on a farm in England which supplied all strawberries to Covent Garden.  She was deeply effected by the War years having to race to the air raid shelter when bombing started and worrying about her father who was driving down to London with the strawberries.. Her passions were teaching and biology.  She spent 20 years in Zimbawe where she was a deputy Principal.

Generous to a fault, never needing the limelight.  Happy to play second fiddle, support act, behind the scenes.

I heard about an open garden in Roseville on the radio.  It is a slow and painstaking experience to extricate Mary from her small apartment. One that can’t be hurried.

People we encounter seem to sense that Mary is on her final journey. She reminds me of a little Buddha. She no longer wears a wig to cover her bald head. Instead, she sports jaunty hats, vibrantly coloured beanies and caps.

We both absolutely love the garden which turns out to belong to a fellow real estate colleague.

We visit the zoo today. Mary is now in a wheelchair and my friend Vince has come along to help push.  She had been a volunteer at the zoo for many years and as we make our way up and down the paths between the animal enclosures, she is in heaven. She became exultant inside the one where she used to do her watch.

I check with Mary in the morning to see if she is up to going out for lunch or whether she would prefer I make something for her. She is not sure but tells me she still has a fridge freezer with plenty of stuff that we can decide when I arrive.  And just as well because I wouldn’t have had time to cook.  The Editorial the Manly Daily printed on the property I have for sale has resulted in an avalanche of enquiries. I race off to show the property and only make it to Mary’s with a minute to spare.

When I arrive, Mary is dressed ready to go and smiling.  Not too bad today she tells me.  The reaction to Mary’s predicament by other people is amazing. I am concerned that she will somehow be rebuffed or hurt in exhibiting her gentle courage. But my fears are allayed. It is almost as if she has taken on a spiritual quality and her appearance is definitely ethereal which seem to give an awareness to others that she is walking along the last path of her life journey.

She seems to have contracted.  Every time I see her it is as though she is diminishing before my eyes. Her skin is luminous, her bald head either capped or sporting a jaunty cap, her eyes crinkled into a smile. Serenity emanates from her acceptance of what is happening to her. We decide to go down to one of the three cafes between Queenscliff and Manly and after checking the menus out decide on Ash’s because it is the only one which has soup.  Mary now seems to prefer her food in this form rather than its original state. However, instead of the pea and ham soup on offer, she decides on eggs benedict which arrives with at least half a pint of hollandaise sauce on it. She does extremely well for someone without much of an appetite, polishing the lot off.  I am sure the sea breeze blowing on our faces, the view of the ocean, the very pretty, attentive wait staff and being surrounded by other people acts as a stimulant.

Mary appears to be shrinking even more so today.  She doesn’t feel like eating which is not surprising because she is being pumped full of various medications.

She is now spending a few days  in hospital where there is even a machine to get her out of bed.   When I visit her today, she tells me she is undergoing all kinds of procedures.  I shudder to think about them. When she confers with the palliative doctor who is looking after her, it is like one professor talking to another about a patient. She will be coming back home today. I notice people looking at us and think we are an unlikely combination.

The last time we go out, on the way back to her place we stop by the Farmers’ Market in Manly.  Everybody seems to know Mary and acknowledges her.

She doesn’t have the energy to go out anymore, so I cook things for her and bring them over.  She still manages to have a good appetite for someone who never seemed to be that interested in food. She particularly likes my cauliflower cheese.

Her beloved son, who lives in France manages to come over during her last days.  Mary is in seventh heaven.  I make a feast for us which we all eat together.  Nobody would believe that Mary was on her last legs.

Mary retained her sense of humour to the end, managing a chuckle on her last day on earth, when I told her I could talk underwater.

It was indeed a privilege to spend this last period of time with my special friend Mary.  She lived each moment of each day. Being with her was like sharing time with a small child. Every moment was treasured.  Every experience savoured.

Although Mary and I met in the early 90’s, the quality time we spent together during this period will stay with me for the rest of my life. Our relationship reached a new depth.

What a hero Mary was! Always smiling, never complaining despite the terrible procedures she had to endure.

She died on 25th November and even on her last day we discussed the crossword clues and she laughed when I told her I found it difficult to sit quietly and not talk and my friends all know the truth of this.

Just before I left, she put her hand on mine and told me she would be all right.  She died a couple of hours later.